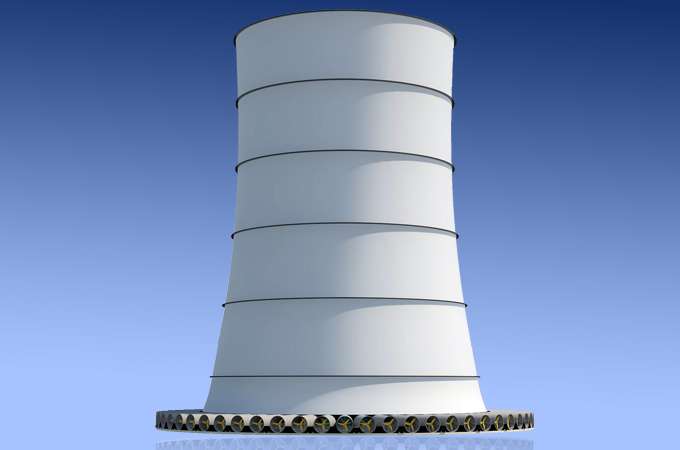 Imagine climbing to the top of New York City’s One World Trade Center, and then another 500 feet into the sky, and you’ve got an idea of how big the first solar downdraft tower will be. This new idea for clean power generation uses sunlight—sort of—and wind power—kind of—to generate an astonishing amount of electricity from an astonishingly tall tower. And one such structure will soon rise in the Arizona desert.

“This principle of creating the downdraft is absolutely proven science; there is no mystery about it,” says Ronald Pickett, CEO of Solar Wind Energy Tower. It is actually quite a simple idea, one that uses the sun’s heat without needing its direct rays. Water particles are sprayed from the top of a tall tower to cool the air. The cooler air then drops down through the tower (hot air rises, cool air falls) to its base, where it rushes into tunnels housing wind turbines. Those turbines power generators, and voilà: a massive solar/wind, hybrid energy system that can run all day and night, in the middle of the desert.

And we do mean desert. This system works only in places that are very hot and very dry. “Humidity is our enemy,” Pickett says; only the driest air will yield big-enough differences from the sprayed water vapor to create fast-enough downdrafts to run the turbines. The water will come from whatever source is available in a given location: groundwater or even desalinated seawater.

Pickett’s company is planning to start construction on its first solar wind energy tower late in 2015 in sunny San Luis, Arizona—where, he says, the project will use plentiful groundwater amounting to only “a fraction” of the town’s water allocation. It is also eyeing places such as Mexico, Namibia, and various Middle Eastern locales. The tower size is not fixed in stone; the Arizona tower will top out at 2,250 feet with a maximum capacity of 1,250 megawatts (around the size of the biggest nuclear reactors), but others could be made to different specs.

The Arizona project will cost a lot up front—$1.5 billion—but should provide electricity at lower rates than almost any other source out there. Research conducted in Australia, home to plenty of hot and dry spots, suggests energy from downdraft towers could cost the same as—or even less than—coal and natural gas.

So far, Pickett says, the biggest challenge hasn’t been so much the technology but rather how people perceive it: we often get scared off by something we haven’t seen before. In this case, we may need to throw out preconceived notions of what a power plant should look like.