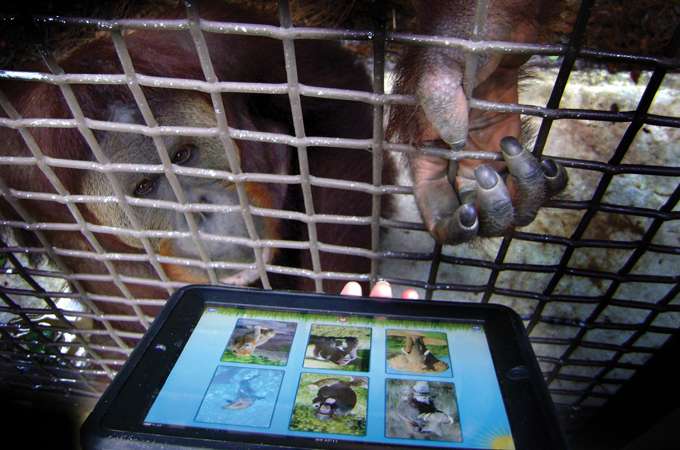 Why restrict the Web to one species?
By Diane Ackerman

“There you go! That’s good!” Matt says encouragingly. “Do a couple more.” One prismatic chord follows another, as Budi knuckle-dances across the iPad.

I’m reminded of the YouTube video in which Panbanisha, a 19-year-old bonobo at the Language Research Center in Atlanta, is introduced to a full-size keyboard for the first time by the musician Peter Gabriel. Sitting on the piano bench, she considers the keyboard for a moment, then noodles around on it, discovers a note she likes, then finds the octave and picks out notes within it, creating a melody that floats above Gabriel’s improvised background. Especially wondrous is her sense of musical timing, the negative space between notes when, neither rushed nor dragged, each note hovers in the air like a diver at the arc of a dive before falling into a shared pool of reverberating silence, from which, at a pleasing interval, another note arises. After a while, she cuts loose and jams harmonies with his vocals.

“There was clear, sharp, musical intelligence at work,” Gabriel says. She was “tender and open and expressive.”

Her brother Kanzi came in next, and even though he’d never sat at a piano before, when he saw how much attention his sister was getting, “he threw down his blanket like James Brown discarding one of his cloaks,” Gabriel says, “and then does this, you know, fantastic sort of triplet improvisation.”

Gabriel finds orangutans the blues-men of the ape world, “who always look a little sad but [are] amazingly soulful.”

At seven, Budi is still a kid, not a bluesman, and he enjoys playing memory and cognitive games on the iPad, or using the musical and drawing apps, but he’s most fascinated by YouTube videos of other orangutans.

Matt explains, tenderly, that he believes in offering orangutans a way to communicate nonverbally with other apes, including us. Keepers could always hand them things, but if the orangs “could tell anybody what they want, then their lives would get a lot more fulfilling.”

The most ambitious version of that desire is known as the Interspecies Internet. Matt has heard of it and thinks it would be a cool thing to do, though the logistics might be tough. Ever since the 1980s, the cognitive psychologist Diana Reiss, who studies animal intelligence, has been teaching dolphins to use an underwater keyboard (soon to be replaced with a touchscreen) to ask for food, toys, or favorite activities. She and World Wide Web pioneer (and Chief Internet Evangelist at Google) Vint Cerf; Peter Gabriel; and Neil Gershenfeld, director of MIT’s Center for Bits and Atoms, are combining their wide-ranging talents to launch a touchscreen network for cockatoos, dolphins, octopuses, great apes, parrots, elephants, and other intelligent animals to communicate directly with humans and each other.

When the four introduced the idea to the world at a TED Talk, Gabriel said: “Perhaps the most amazing tool man has created is the Internet. What would happen if we could somehow find new interfaces—visual, audio—to allow us to communicate with the remarkable beings we share the planet with?” He told of his great respect for the intelligence of apes and how, growing up on a farm in England, he used to peer into the eyes of cattle and sheep and wonder what they were thinking.

In response to those who say, “The Internet is dehumanizing us. Why are we imposing it on animals?” Gabriel replied: “If you look at a lot of technology, you’ll find that the first wave dehumanizes. The second wave, if it’s got good feedback and smart designers, can superhumanize.” He’d love for any intelligent species that is interested to explore the Internet in the same way we do.

Cerf added that we shouldn’t restrict the Internet to one species. Other sentient species should be part of the network, too. And, in that spirit, the most important aspect of the project is learning how to communicate with species “who are not us but share a sensory environment.”

Gershenfeld said that when he saw the video clip of Panbanisha jamming with Gabriel, he was struck by the history of the Internet. “It started as the Internet of mostly middle-aged white men,” he said. “I realized that we humans had missed something—the rest of the planet.”

If the Interspecies Internet is the next logical step, what will it be a prelude to? Gershenfeld looks forward to “computers without keypads or mice,” controlled by reins of thought, prompted by waves of feelings and memories. It’s one thing to be able to translate our ideas into the physical environment, but [it’s] a giant step for humankind to do that with thoughts alone. Telekinesis used to belong only to science fiction, but we’re well on our way to that ascendancy now, as paralyzed patients learn to wield prosthetic arms and propel exoskeleton legs via muscular thoughts. These possibilities change how we imagine the brain, no longer a skull-bound captive.

“Forty years ago,” Cerf said, “we wrote the script of the Internet. Thirty years ago we turned it on. We thought we were building a system to connect computers together. But we quickly learned that it’s a system for connecting people.” Now we’re “figuring out how to communicate with something that’s not a person. You know where this is going,” Cerf continued. “These actions with other animals will teach us, ultimately, how we might interact with an alien species from another world. I can hardly wait.” Cerf is leading a NASA initiative to create an Interplanetary Internet which can be used by crews on spacecraft between the planets. Who knows what spin-off Internets will follow?

Reiss pointed out that dolphins are mighty alien. “These are true nonterrestrials.”

The Apps for Apes program is but one part of our postindustrial, nanotech, handcrafted, digitally stitched world in which luminous webs help us relate to friends, strangers, and other intelligent life forms, whether or not they have a brain.

Diane Ackerman has been a finalist for the Pulitzer Prize for General Nonfiction in addition to many other awards and recognitions for her work, which includes the best-selling The Zookeeper’s Wife and A Natural History of the Senses. She lives with her husband, Paul West, in Ithaca, New York.