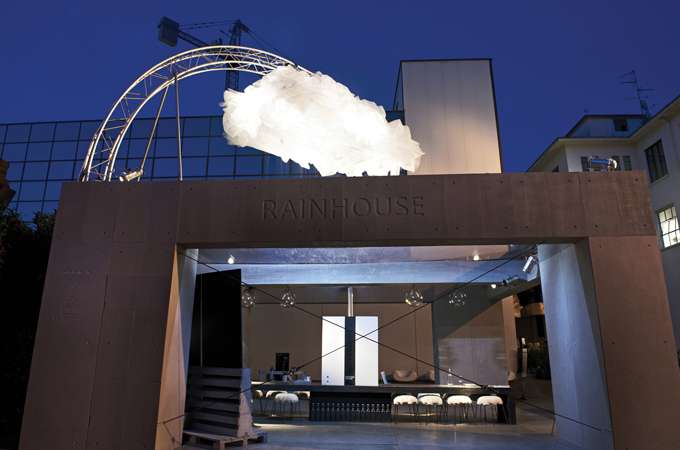 This Entire House Is a Water Filter

Hungarian design firm IVANKA is an avant-garde concrete company. Over the past decade, they’ve developed unexpected ways to incorporate this utilitarian material into everything from designer handbags to BMW concept cars. Lately, though, the company is focusing not just on luxury goods but on the most basic of everyday resources: clean water. Their new “bio-concrete” could turn houses, schools, and factories into giant water filters to produce drinking water from rain.

In principle, rainfall harvesting is nothing new: green buildings often capture rainwater to use for watering plants or flushing toilets. But IVANKA aims to make rainwater potable, an unusual feat. That’s why the system represents “the missing link for ecological housing,” according to Katalin Ivanka, cofounder of the eponymous firm.

Rainwater falls onto roof tiles made of bio-concrete, which softens the water and neutralizes its pH. (In fact, limestone—a major component of concrete—is used to remediate acid waters, and natural limestone cave aquifers are renowned for producing pure, clean-tasting water.) From there, the runoff is directed through a series of stainless steel pipes that remove more contaminants, winding up in a cistern made of bio-concrete with a silver-containing lining that discourages microbial growth. The result is a water purification system that doesn’t rely on added chemicals and could also help deal with stormwater runoff in urban areas.

A model bio-concrete home was on display during Milan Design Week last spring. Visitors had a chance to sample water that fell from a fake “cloud” suspended over the building. The water purification system can be built at any scale, from single-family home to factory, the company says, and a version of it could also be added to existing buildings. They estimate that about half the world’s countries get enough rainfall to make bio-concrete workable.