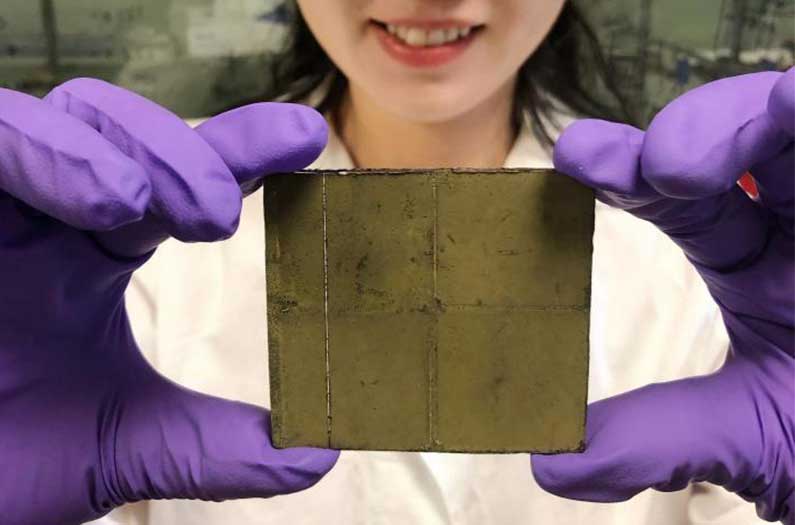 Sunlight-absorbing sheets that make fuel from carbon dioxide and water could reduce greenhouse gas in the atmosphere, and our dependence on fossil fuels
By Prachi Patel
August 27, 2020

Plants effortlessly turn sunlight and carbon dioxide into energy, and researchers have been trying to mimic this process for decades. However, artificial photosynthesis techniques developed so far use a lot of energy or generate unwanted byproducts. Now, researchers have made a standalone device that can convert sunlight, carbon dioxide and water into formic acid and oxygen.

“We were surprised how well it worked in terms of its selectivity—it produced almost no by-products,” said Qian Wang, a chemist at the University of Cambridge who conducted the research published in Nature Energy. “Sometimes things don’t work as well as you expected, but this was a rare case where it actually worked better.”

Technologies that harvest solar energy to convert carbon dioxide into fuels are two-pronged tools for fighting climate change: they could help reduce levels of the greenhouse gas in the atmosphere and would also reduce our dependence on fossil fuels.

Last year, Cambridge chemistry professor Erwin Reisner and his colleagues reported an artificial leaf that converted water and sunlight into fuel. That device incorporated solar cell materials that soaked up sunlight, and produced syngas: a mixture of carbon monoxide and hydrogen.

The new device does something similar, but its mechanism is different. It contains novel photocatalysts embedded in a sheet made of semiconductor powders, which can be produced easily and cheaply. And unlike the artificial leaf, it produces formic acid, a liquid that can be stored and transported easily, and later used directly as a fuel or converted into hydrogen.

The current laboratory prototype is small, about 20 square centimeters in size, but the researchers say that it should be relatively simple to scale it up to several square meters. They envision large solar farm-like facilities built with arrays of these devices turning sunlight and water into clean fuel.

The team is now experimenting with catalysts other than the cobalt-based one they used for this work to make the process more efficient and to produce different solar fuels.