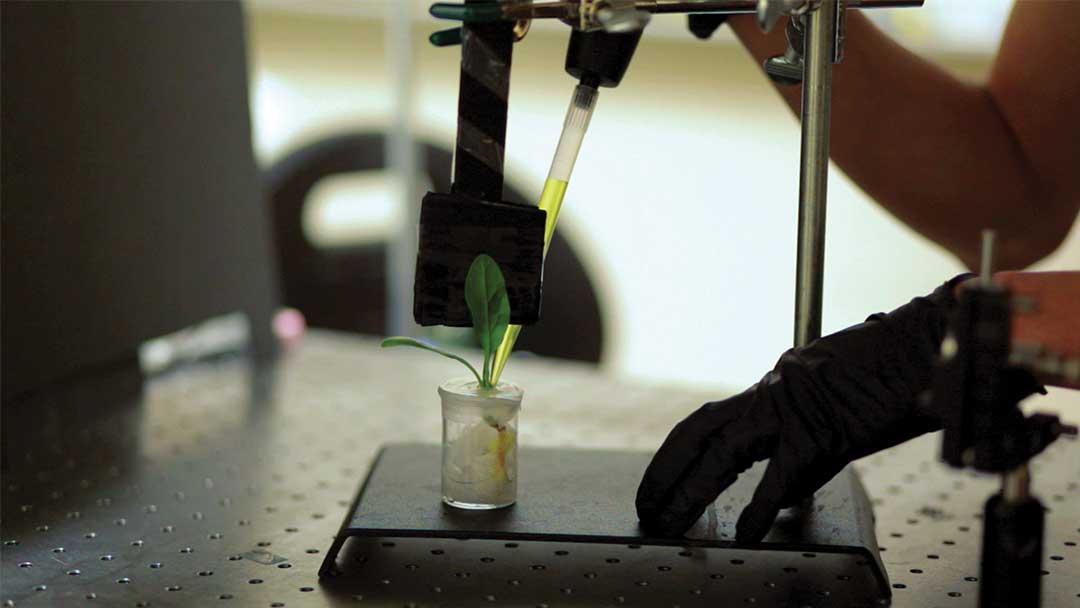 
Spinach that can detect explosives

Engineers have discovered how to transform spinach plants into environmental sensors that can alert us to the presence of explosives. The development is one in the nascent field of “cyborg botany,” a merging of nature and technology that draws upon plants’ remarkable sensory capabilities in order to drive robots, provide environmental data, and more.

In 2016, chemical engineer Min Hao Wong and his team at MIT transported carbon nanotubes into spinach leaves via their stomata. Traces of explosive material that the plant took in through the air or groundwater caused the nanotubes to emit a fluorescent signal. To get the message from the plant, Wong’s team focused a small infrared camera on the leaves and attached it to a Raspberry Pi, a cheap, miniature computer similar to what’s found in smartphones. When the camera detected a signal, it triggered an email alert.

Having worked out the spinach nanosensors, Wong has gone on to develop other applications of the technology—particularly in agriculture. Plants are extremely perceptive, so they may be able to warn of drought conditions or pest infestations before a farmer can detect them. Wong is exploring commercialization of the technology in his current role as deputy science director of Disruptive & Sustainable Technology for Agricultural Precision (DiSTAP), a research center in Singapore.

Plants may have a lot to tell us. We’re now just learning how to get the message. 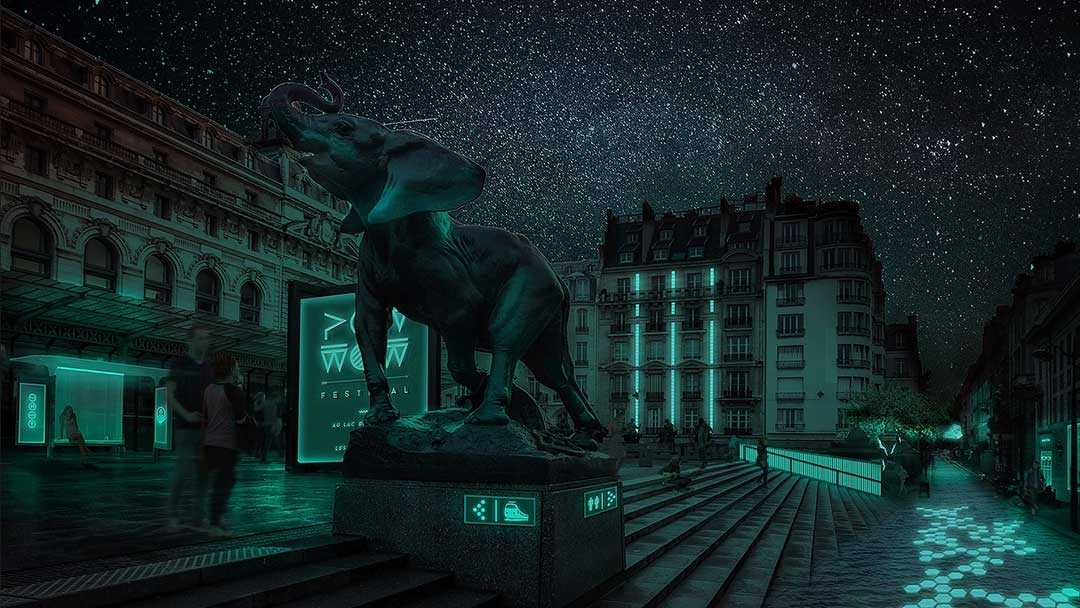 Bioluminescence to light up the city

We terrestrial beings have long marveled at how some squid, jellyfish, and other sea creatures produce their own entrancing glows—a phenomenon known as bioluminescence. French designer Sandra Rey’s curiosity about that light inspired her to bring it up and out of the sea. She imagines bioluminescence as a natural resource on land for creating “living” lights: ones that emit a soothing glow without electricity.

Rey is the founder and CEO of Glowee, a company that merges biomimicry with synthetic biology to produce bioluminescent lights. She envisions that they could one day replace the ordinary electric streetlight and cut down on the CO2 emissions that lighting generates.

To create oceanic light on land, Glowee technicians insert the bioluminescence gene from the Hawaiian bobtail squid into E. coli bacteria, then cultivate those bacteria. What’s more, by programming the DNA, engineers can control the color of the light, when it turns off and on, and more.

To create oceanic light on land, technicians insert the bioluminescence gene from the Hawaiian bobtail squid into E. coli bacteria, then cultivate those bacteria. 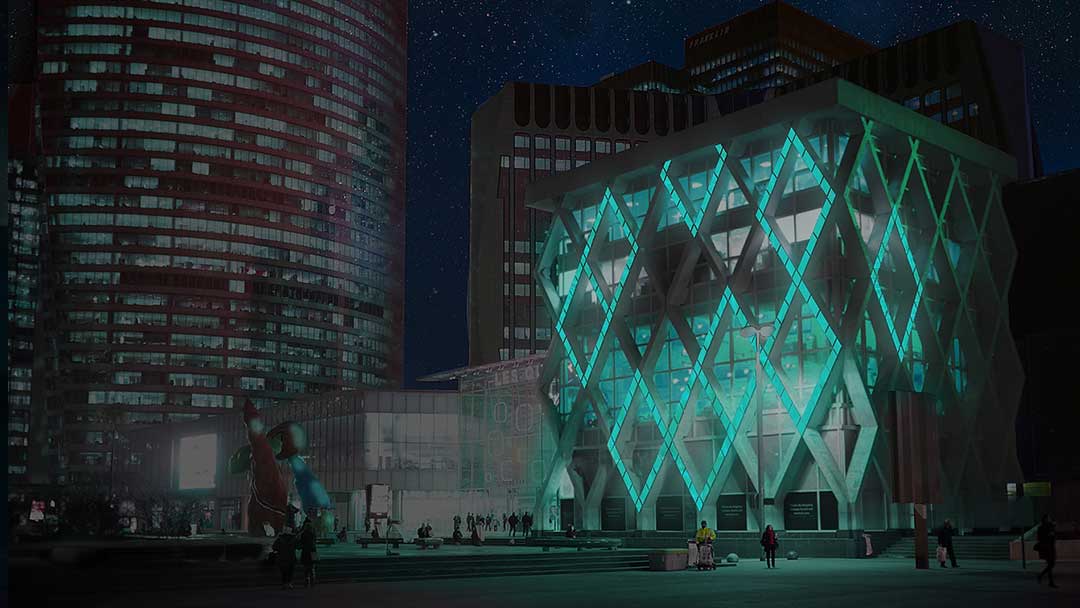 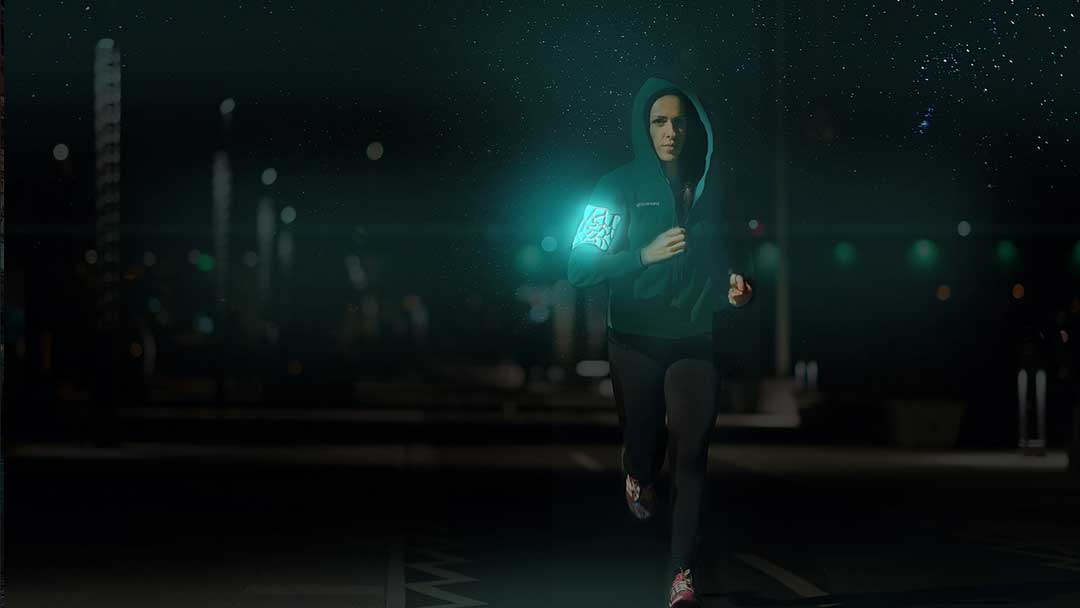 The bacteria, of course, need care and feeding to keep glowing, so the company is working on ways to keep the lights on longer. At this point, says Rey, they have one system that lasts for six days and another that works like a fish tank: “As soon as you feed the system, the bacteria will produce light,” she says.

Glowee’s lights can take on any shape, from the standard streetlight to a window sticker, so the company has let its imagination run free with possible applications. The lights’ current limited lifespan makes them well suited for events or festivals. In addition, some French shop owners, prohibited from illuminating signs or window displays in the middle of the night due to light pollution and energy-use concerns, are looking forward to applying bioluminescent stickers to their windows.

Ultimately, Rey has grander plans for bioluminescent lights. “For us, the biggest opportunity is to create networks of these living lights in the streets of tomorrow,” she says.

Sure, improvements in energy efficiency may help contain lighting’s
environmental footprint. But to light up regions of the world that still lack access to electricity, we need big leaps forward in ecofriendly light. Rey may have just plucked one answer straight out of the ocean. 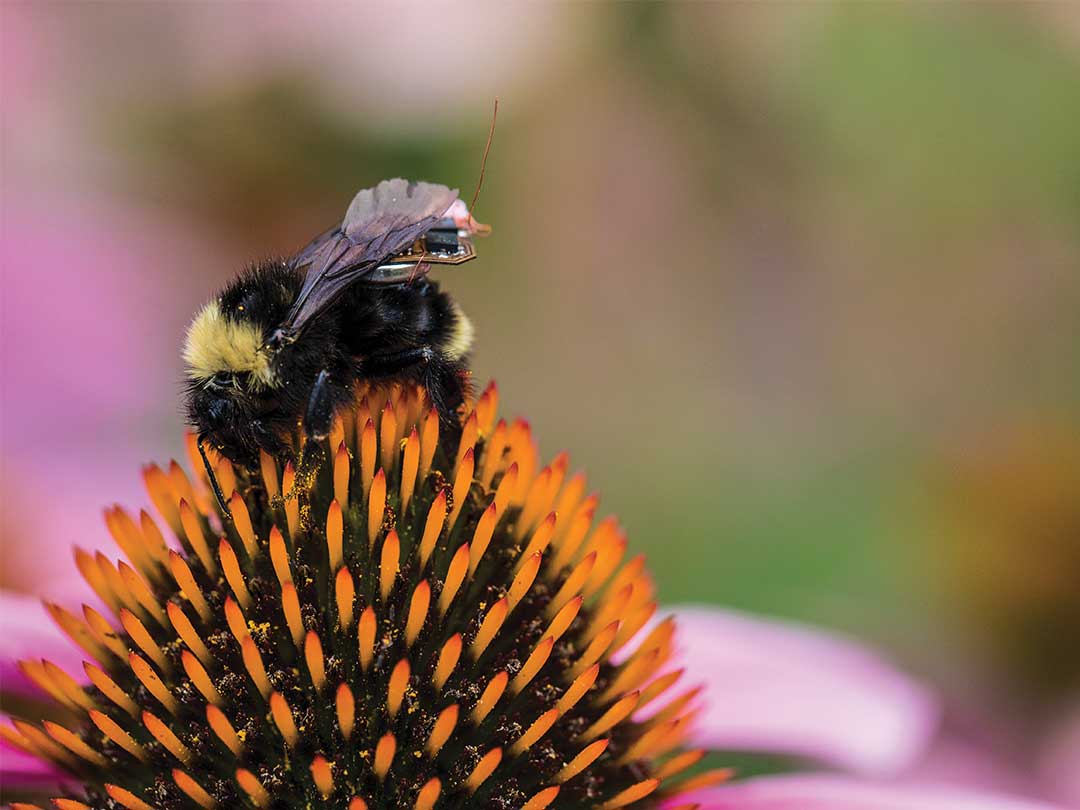 An Internet of bees

Bumblebees carrying location-tracking and sensor-laden “backpacks” might someday replace the drones that farmers use to monitor their fields. Engineers at the University of Washington found that instead of bulky equipment that needs frequent recharging, they could equip insects with tiny yet powerful devices to do the job.

Other researchers have tried to create completely robotic insects, but those miniature robots struggle to fly in turbulent conditions and are limited by power from a tiny battery. The UW team has instead harnessed the bees’ mechanics rather than try to copy them. Thanks to evolution, insects have already worked out how to navigate in a range of conditions, and they can power themselves. 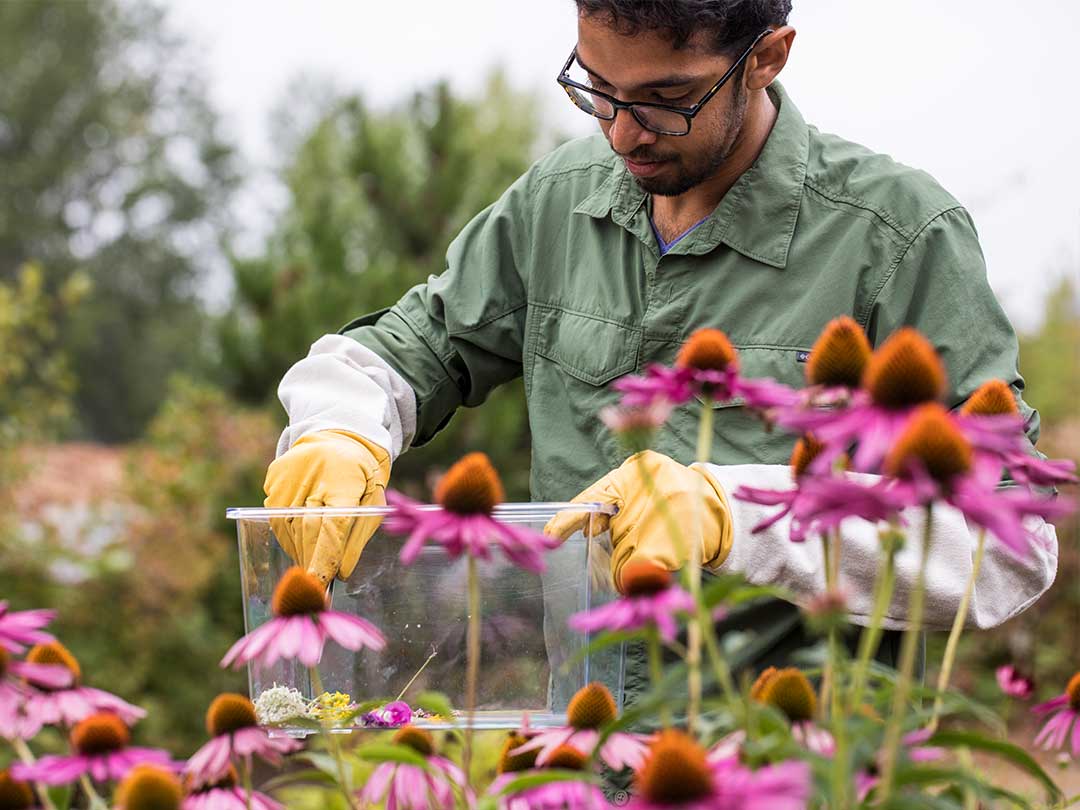 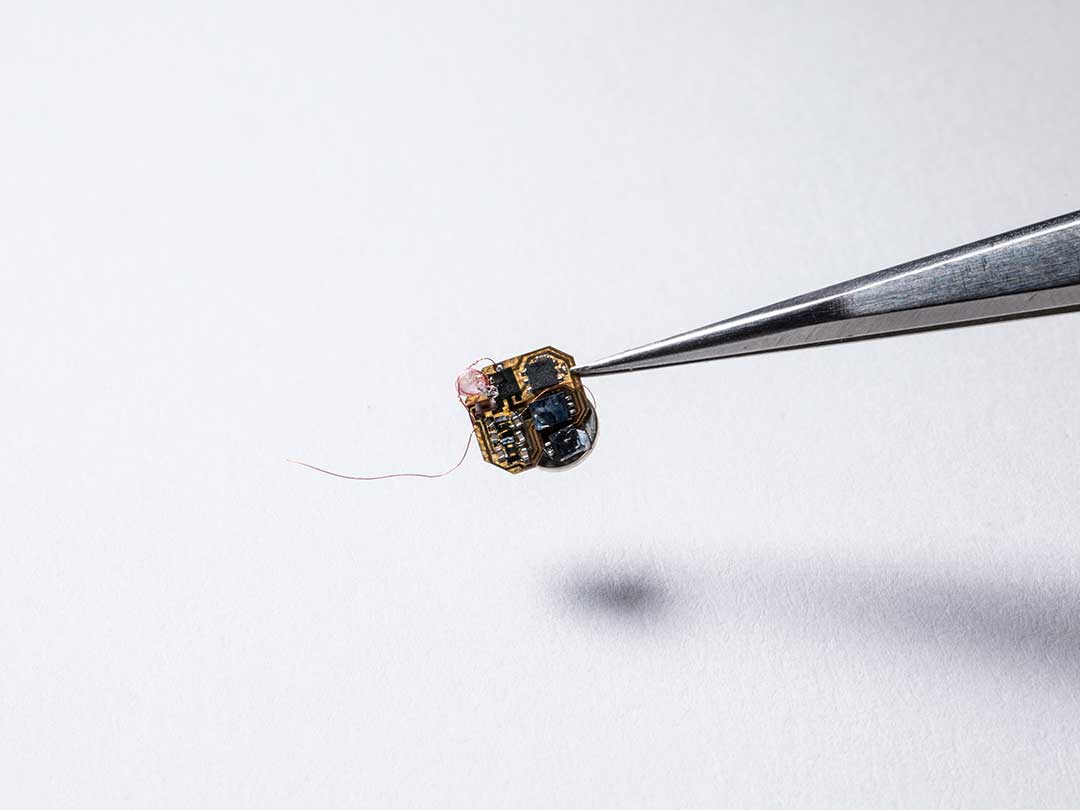 To make bumblebees work as precision agricultural tools, the engineers were able to load sensors, data storage, receivers for location tracking, and a rechargeable battery into a 102-milligram package. As the bees go about their everyday activity, the sensors measure temperature and humidity, and their position is tracked via radio signal. When they go back to the hive, the data are uploaded and the battery recharges wirelessly.

The team refers to its technology as Living IoT (for Internet of Things), and it envisions a network of sensors that leverages biology for new environmental monitoring possibilities—letting nature
be the guide. 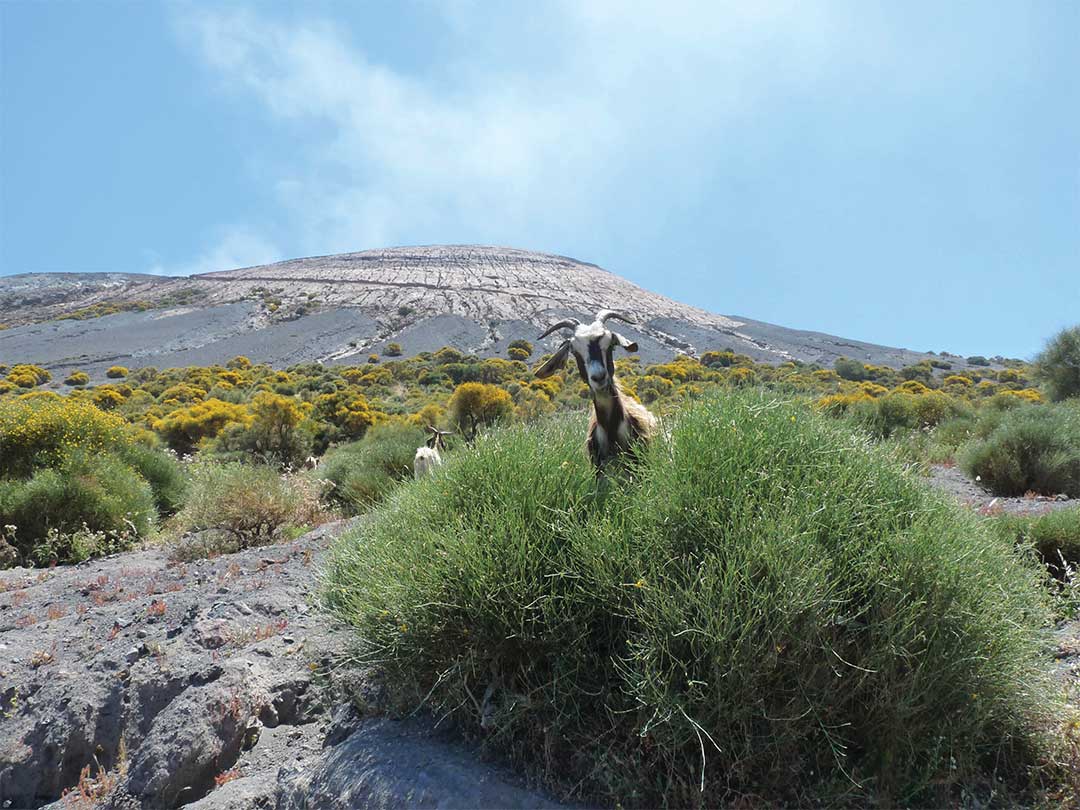 Modest ruminants: Goats live year-round on the slopes of Mount Etna in Sicily. The animals have a keen instinct for what’s happening inside the volcano. ©Lorenzo Blangiardi via Flickr CC

The Roman author Aelian wrote of an amazing phenomenon in Greece that occurred five days before a large earthquake struck in 373 B.C. Mice, martens, snakes, and other creatures curiously fled town, he recorded.

As a high-school student, zoologist Martin Wikelski translated ancient Greek and Roman texts. This is how he first came across the idea that animals might have an innate ability to sense impending disaster.

Wikelski now directs the International Cooperation for Animal Research Using
Space—the ICARUS initiative—out of the Max Planck Institute for Ornithology. He’s made a name for himself attaching GPS tags to animals large and small to see what their collective behavior might reveal. Among other phenomena, he’s shown that the presence of white storks can signify locust outbreaks and that the location and body temperature of mallards can portend the spread of avian influenza in humans.

Wikelski wants to understand behavior patterns of different animals in the wild and see which “sensors” are better at predicting natural disasters.

Now he’s looking to goats to see if the ancients’ theory that animals “know” about imminent earthquakes and volcanic eruptions holds water. Sure, it’s still a controversial idea, but perhaps 24/7 data collection around big events could provide scientific credence one way or another.

Immediately after a powerful earthquake shook Norcia, Italy, in 2016, Wikelski outfitted farm animals near the epicenter with collars to see if they behaved differently in advance of aftershocks. Each collar housed both a GPS tracking device and an accelerometer. With this around-the-clock monitoring, he says, you can observe what “normal” behavior is and look for deviations from that.

In Italy, Wikelski and his team measured that the animals collectively increased their body accelerations over background levels hours before earthquakes struck. He observed “warning times” of between 2 and 18 hours, with longer times corresponding to more-distant epicenters. He is in the process of publishing more details on his findings.

Moving forward, he’s interested in better understanding the mechanism by which animals perceive these natural phenomena. If it’s simply that animals are very sensitive to the earth’s shaking, he says, seismologists would have already solved earthquake prediction. Instead, rocks under high stress before a quake force charged particles out of the minerals. “There’s a charge in the air,” he says, “and that’s possibly what the animals are sensing.”

Further, Wikelski wants to tap into a larger network of tagged animals around the Ring of Fire. He wants to understand behavior patterns of different animals in the wild and see which “sensors” are better at predicting natural disasters. He’s applied for a patent for a disaster-alert system based on animals’ collective aberrant behavior relative to a baseline.

As human activity impinges on animals around the world, Wikelski hopes that his emerging “Internet of animals” offers even more reason to care for them. The insights they can provide, he’s discovering, may prove more valuable than ever.

Lindsey Doermann is a science writer based in Seattle, Washington 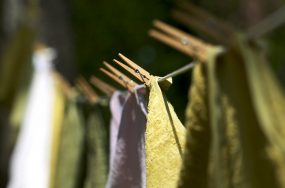 Nanosilver may cut down on odor, but does it make clothing “green”?

Nanosilver may cut down on odor, but does it make clothing “green”? 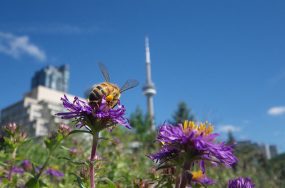