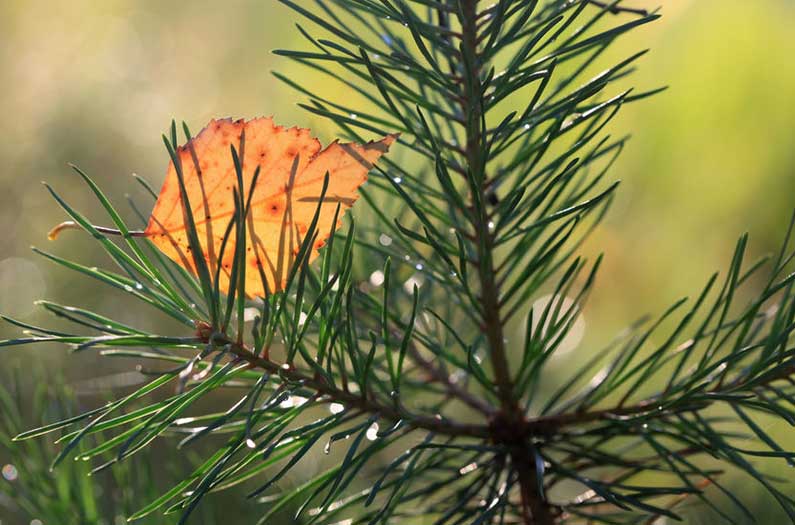 Researchers found that stands that had shifted to deciduous dominance had a net increase in carbon storage by a factor of five over the disturbance cycle
By Berly McCoy
April 21, 2021

As more intense forest fires continue to release stored carbon into the atmosphere and alter forest make up, scientists are trying to understand the long-term effects changing forest landscapes will have on carbon emissions. Recently a team of researchers found that deciduous trees are starting to dominate areas previously covered by slow-growing spruce trees. The work, published in Science, finds that the faster-growing deciduous trees can store more carbon over a 100-year recovery period than the previous spruce forests, leading to net positive carbon storage.

The researchers focused their study on the boreal forest in Alaska after the devastating 2004 fire season. The area, dominated by slow-growing black spruce, has historically been a net carbon sink. But more intense fires are burning deeper into the soil, which is where black spruce trees store most of their carbon. This disturbance in the soil has allowed more deciduous trees, like aspen and birch, to grow and often dominant tree stands after wildfires.

Initially, the team looked at how many sites that were dominated by black spruce before fire shifted to either a mixed forest or a deciduous dominated one. They found that 72 percent of the 75 sites examined made the shift.

To understand how this shift in forest composition would affect the carbon balance in the long-term, the researchers used modelling software to predict the rate of carbon storage in forests previously burned by wildfire. Over a 13-year period they collected tree location, burn depth and carbon storage data from close to 250 forest stands in Interior Alaska, and then modelled the carbon storage trajectory in each tree stand type over a 100 year recovery period.

Read:  Q: Why did gasoline cars come to dominate the road? A: Infrastructure

The team found that compared to areas that remained dominated by black spruce, deciduous-dominated sites stored carbon four times faster, which led to an increase in carbon storage by 1.6 times over the recovery period. The total predicted amount would more than make up for large recent carbon losses. Most of the carbon would be stored aboveground, a shift that the authors highlight has been documented in other forests around the world. This suggests that this kind of study could be generalized to other shifting forests.

Although it’s uncertain how these deciduous trees will respond to future fires over the next century, their less-flammable nature means they may help slow the spread and decrease the intensity of blazes to come.

“In a region with only five common tree species, this study shows how changes in tree composition can dramatically alter patterns of carbon storage in boreal forests,” said Jill Johnstone, a northern researcher at University of Alaska-Fairbanks and co-author of the study, in a press release.