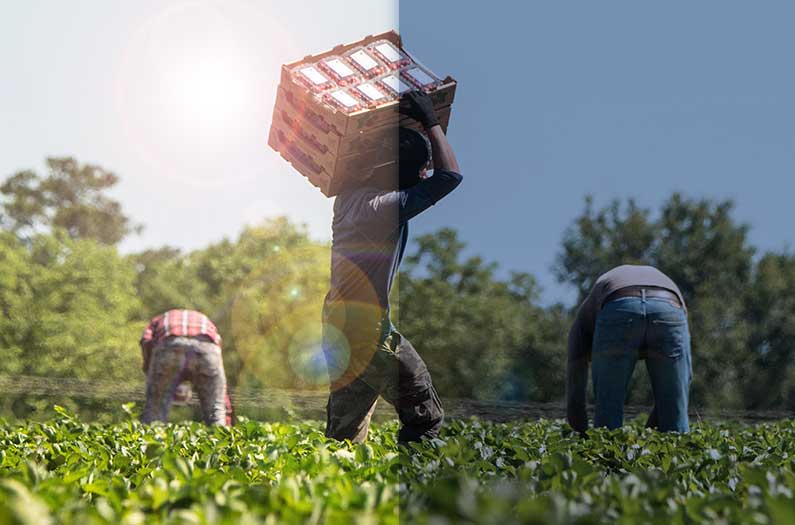 In the face of climate change, it’s time to rethink regular work hours
According to a first-of-its-kind study, working at night or in the cool of the morning could spare outdoor laborers extreme heat exposure—at least for the time being.
By Sarah DeWeerdt
January 4, 2022

About 30% of the work hours currently being lost to extreme heat could be recovered if work schedules shifted from some of the hottest hours of the day to some of the coolest, according to a new study.

The findings suggest a strategy to help human societies adapt to climate change – but one that becomes less effective as the planet heats further.

“Working in hot and humid environments can be dangerous because high temperatures combined with high humidity limit the body’s ability to cool itself by sweating,” explains study team member Luke Parsons, a postdoctoral researcher studying the impacts of climate change at Duke University in Durham, North Carolina.

“Workers in many hot and humid locations are already stopping or slowing work in the middle of the day because it is too uncomfortable or unsafe to conduct heavy labor,” Parsons says. These conditions affect hundreds of millions of workers in agriculture, forestry, fisheries, and construction, especially in the tropics.

Shifting work schedules is one of several strategies that have been suggested to cope with dangerous heat conditions, which will increase as the planet continues to warm. But no one had yet assessed the feasibility of doing so at a global scale.

In the new study, Parsons and his colleagues combined data on temperature and humidity from global climate models with data on population and jobs in different countries to estimate labor losses from hot and humid conditions.

The labor productivity lost to extreme heat may already amount to as much as US$ 670 billion every year, the researchers report in Nature Communications. That could climb to US$ 1.6 trillion annually with an additional 2 oC of warming.

Heat exposure grows more or less linearly with global warming, according to the researchers’ calculations. But labor losses grow faster than that, because as the planet warms extreme heat affects larger and larger portions of the globe. Plus, especially in the tropics, more hours of the day become too hot to work.

Currently the highest burden of labor losses from extreme heat falls on countries in Southwest Asia, South Asia, and Africa. Qatar and Bahrain lose the most hours per worker, and India, with its large population, loses the largest number of total work hours per year. With future warming, India, China, Pakistan, and Indonesia will take the biggest economic hits.

Under current conditions, about 30% of global labor losses due to extreme heat during the 3 hottest hours of the day could be saved by shifting that work to the 3 coolest hours. “However, we show that as the globe warms, the coolest hours of the day also get warmer, so this adaptation strategy becomes less effective with each degree of global warming,” Parsons says. With an additional 4 °C of warming, only 22% of labor losses could be recovered by moving work from the 3 hottest to the 3 coolest hours.

In addition to economic losses, exposure to extreme heat can cause health problems for workers and can even be deadly. And shifting working hours itself isn’t without impacts: for example, changing work hours can impact sleep, which can then make workers more prone to injuries on the job.

“I think it’s important for us to recognize that heat exposure and this lost potential productivity can have implications for the health and well-being of workers and economy, especially as policymakers weigh the costs and benefits of limiting climate change,” Parsons says. “I hope this work calls attention to how climate change is already impacting and will impact people who depend on outdoor work to support themselves and their communities.”