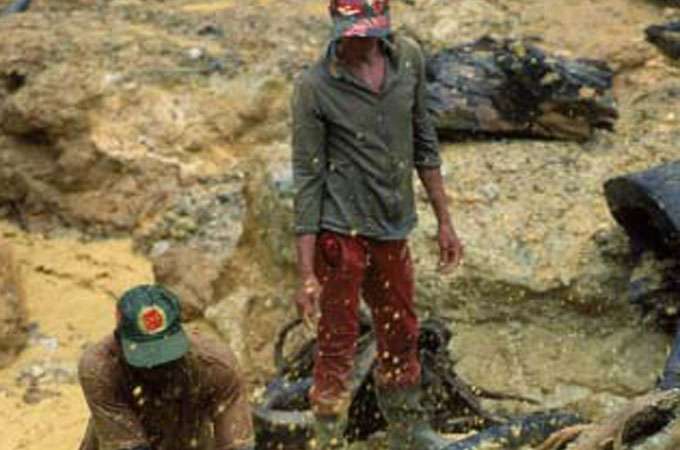 Mercury poisoning has not been enough to make Suriname regulate small-scale gold mining — but sediment may. Although it is hardly as frightening as mercury, sediment can be just as deadly to stream ecosystems. And new research links sediment to a large reduction in food fish in Suriname, a finding that could catch policymakers’ attention because fish are the main protein source for people living in Suriname’s forests.

“The adverse effect of mining-related sediment on the abundance of highly valued food fishes may sooner convince policymakers in Suriname of the need to regulate the informal gold-mining sector… than the slow, secretive danger of mercury,” say Jan Mol and Paul Ouboter, both of the University of Suriname in Paramaribo, in the February issue of Conservation Biology.

Widespread in tropical South America since the 1980s, small-scale gold mining is one of the few livelihoods in the interior of Suriname. The country has about 15,000 small-scale gold miners who extract soil with high-pressure hoses and recover the gold by amalgamation with mercury. However, these miners typically fail to build tailing ponds that would allow the sediment to settle before draining the extraction water into streams. This can harm the many South American fish that are adapted to clear water.

Mol and Ouboter compared sedimentation and fish diversity over seven years in two small rainforest streams in Suriname’s Gros Rosebel area, which is near Paramaribo. One (Maykabuka Creek) is undisturbed and the other (Mamanari Creek) is in a catchment that has had small-scale gold miners since 1994. Both creeks were initially clear but the “mined” creek has been turbid since the first fish survey in 1994.

The researchers found that the “mined” creek had nearly 24 times more sediment than the undisturbed creek: an estimated 3.1 vs. 0.13 metric tons per catchment hectare per year. This sediment reduced visibility by about 80 percent and covered the gravel beds, holes in stream banks, and other nooks where many fish lay their eggs. By the end of the study, shallow runs had about 13 centimeters of sediment and deep pools had more than 30 centimeters. In contrast, the undisturbed creek’s streambed had no measurable fine sediment.

Although mercury is a problem, it is clearly not the only threat from mining. “In their concern over environmental degradation resulting from small-scale gold mining, scientists and the media often have focused on mercury pollution, but new technologies for reducing mercury pollution will not reduce the influx of sediment into streams,” say Mol and Ouboter. Their recommendations include monitoring sediment levels, building tailing ponds, and restoring riparian buffer zones.