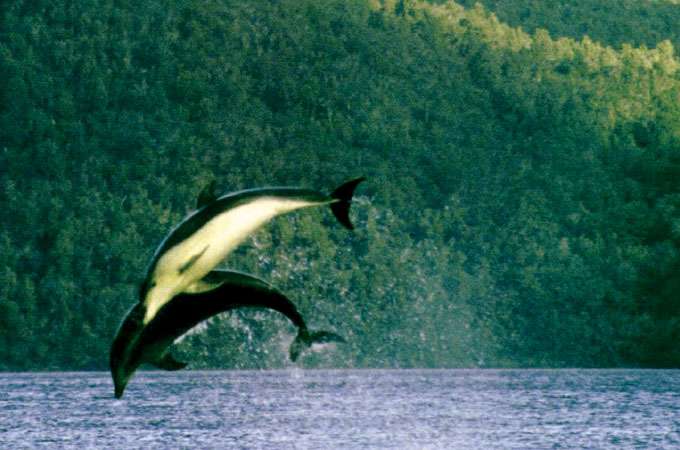 Keeping the Eco in Ecotourism

Too much ecotourism may harm the very creatures that people love to see. New research suggests that tourism boats are disrupting dolphin behavior in southern New Zealand fjords. Too many boats can make dolphins spend less time socializing — which could mean less reproduction — and more time at sea — which could mean more predation.

This work is presented by David Lusseau of the University of Aberdeen, U.K., in Ecology and Society.

Dolphin- and whale- watching are increasingly popular, but little is known about how these tourist activities affect cetaceans. Although there is evidence that boats can change dolphin and whale behavior, no one knows whether these changes are biologically significant.

To help clarify the impact of tourism on cetaceans, Lusseau studied the behavior of two populations of bottlenose dolphins (Tursiops truncates) in adjacent southern New Zealand fjords with different levels of boat traffic. Lusseau determined the two populations’ behavioral budgets, which are related to energy budgets and so are good measures of biological significance. During the two-year study, one fjord (Doubtful Sound) had about 3,500 boat trips, whereas the other (Milford Sound) had more than 17,000 boat trips. Tourism accounted for more than 95 percent of the boat traffic in each fjord.

Lusseau found that tourism boats could indeed have a biologically significant impact on the dolphins. Notably, boat interactions made dolphins half as likely to rest or socialize. Less socializing could mean lower pregnancy and reproduction rates.

“When boat traffic is too intense in Milford Sound, the only way dolphins can keep boat interactions below the threshold is to avoid the fjord… Tourism forces the population to alter the way in which it uses its home range,” says Lusseau. Staying out of fjords means spending more time in coastal waters, where dolphins are presumably more vulnerable to being eaten by sharks.

With the caveat that these specific behavioral budgets and boat tolerance thresholds apply only to the populations studied, Lusseau recommends that resting and socializing dolphins be protected from tourism boats. He also recommends both cutting back tourism in Milford Sound, where the dolphins are over their boat-tolerance threshold, and not expanding tourism in Doubtful Sound, where the dolphins are close to this threshold. “It is a good reason why there should be no further development of the tourism industry in the area,” says Lusseau.