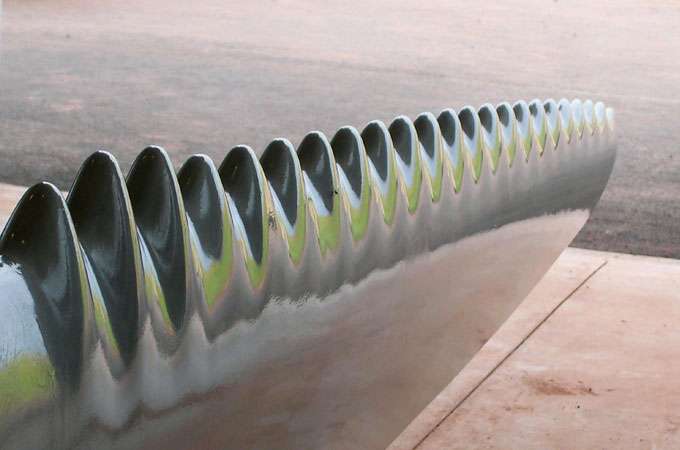 To feed, humpback whales round up prey into nets of bubbles, then blast through the trapped swarm, mouths agape, to catch the feast. Believing bumps on the humpbacks’ flippers aid the underwater maneuver, scientists, in an unlikely twist, are now mimicking the design for a next-generation wind turbine.

The connection between whales and wind was made by Frank E. Fish, a biologist at West Chester University in Pennsylvania and cofounder of a new company called WhalePower. Intrigued by the bumps on humpback flippers, Fish placed similar protrusions on a plastic blade. By testing the design in a wind tunnel, Fish discovered that the bumps control the flow of water around the flipper, preventing whales from stalling during precise maneuvers.

Fish’s research also showed that the bumps, called tubercles, have the same effect on windmills. Tubercle-lined windmill blades can tilt at a much steeper angle before stalling, allowing the blades to harvest more power from the wind. Preliminary tests show the tubercles boost the power output of small windmills by a whopping 20 percent.

Blades for low-watt windmills could hit the market soon, but Fish says it could take years to perfect a design for the larger turbines used on wind farms. ❧