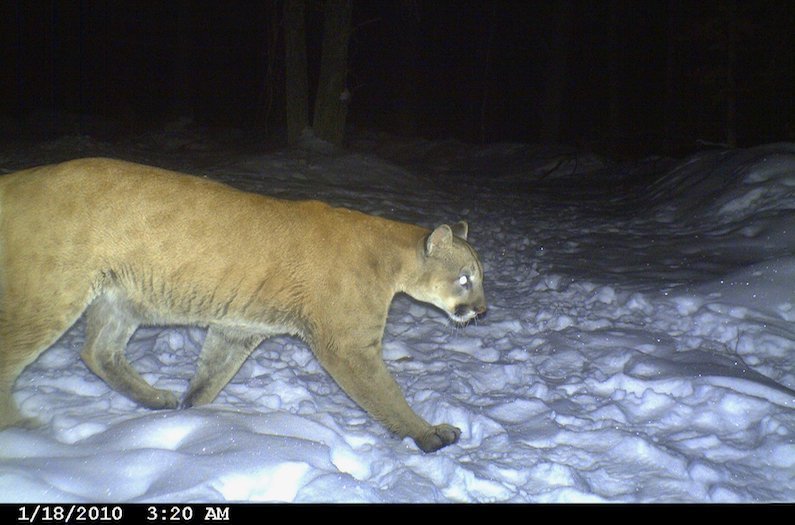 As the death of Cecil demonstrated last year, it’s stories of individual animals that resonate the most. Spare a moment, then, for an extraordinary animal known as the St. Croix cougar.
By Brandon Keim
November 16, 2016

As the death of Cecil demonstrated last year, it’s stories of individual animals that resonate the most. Spare a moment, then, for an extraordinary animal known as the St. Croix cougar.

On a late spring night in 2011, a woman driving on the Cross Parkway in Milford, Connecticut hit the cougar, whom state environmental authorities ascertained as a 140-pound subadult male. At first they assumed he escaped from captivity: after all, no wild cougars—also known as mountain lions or catamounts or Puma concolor—had been confirmed there for more than a century.

As they inspected the body, however, they found no evidence that he’d ever been captive. He’d never been neutered, worn a collar, eaten pet food, or calloused his paws pacing on a concrete floor. He was wild. And when the DNA tests came back, they contained yet another surprise: his genetic profile fit that of cougars living in the Black Hills of South Dakota, a straight-line distance of more than 1,500 miles.

His DNA also matched samples recovered more than a year earlier in Minnesota and St. Croix, Wisconsin—hence the name. He also, they would discover, was likely the same cougar who’d been caught on camera traps in Minnesota, Wisconsin, and Michigan the previous year. Ostensibly searching for a mate and some territory to call his own, he’d roamed from the badlands of South Dakota into the Upper Midwest, then east between the Great Lakes and across the Canadian Shield before reaching New England. 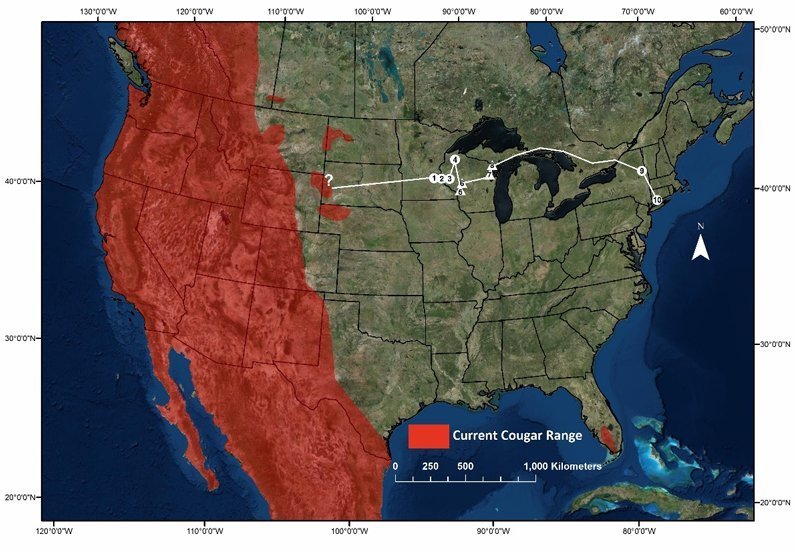 That incredible journey and its scientific reconstruction is recounted in a study published in the latest Journal of Mammalogy. “Male cougars are well-known long-distance dispersers, although never to the extent documented here,” write the study’s authors, who were led by Jason Hawley from Connecticut’s Department of Energy and Environmental Resources. They describe the St. Croix cougar’s travels as “the longest documented dispersal for the species.”

What to make of him? Should the St. Croix cougar be considered a vagabond of sorts, wandering forlornly through a land where his tribe no longer belongs? Perhaps. But he might also be seen as an ambassador of what’s possible as western cougar populations recover and their descendants return to ancestral homes across eastern North America.

That prospect will unsettle some people, and understandably so. Cougars are big, dangerous predators. Though attacks on humans are very rare, they do happen. Sharing a landscape with them will take some work on our part. Hunting might be required to “minimize conflicts and maintain a positive public sentiment towards the species,” says Hawley

Yet he also noted that cougars presently live in southern California and Florida, places with extremely high human population densities, “usually with minimal conflicts.” The St. Croix cougar walked across much of the continent, alone in a strange land, passing through farms and cities and suburbs—and he never attacked anyone. The St. Croix cougar’s story is one of coexistence.