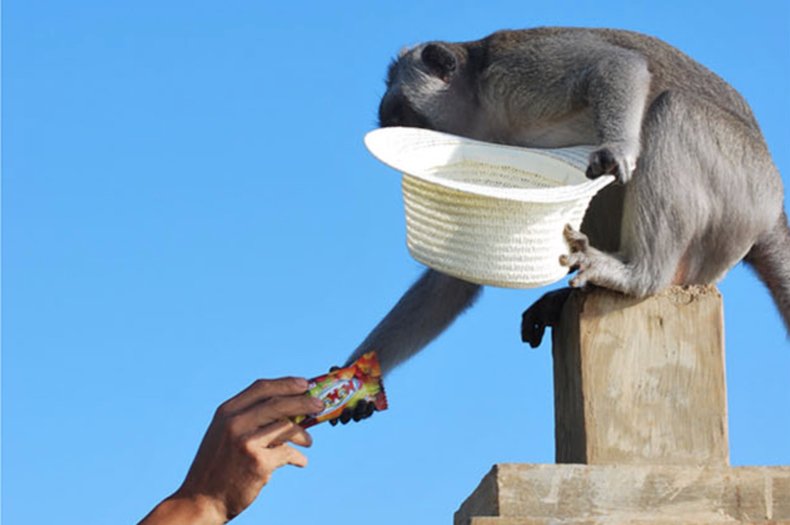 The temple where monkeys trade with humans

Thirty or so years ago, a long-tailed macaque at the Uluwatu Temple in Bali, Indonesia took something from a visitor. A pair of sunglasses, maybe, or a hat. And so began what’s become a thriving, one-of-a-kind monkey-human economy.
By Brandon Keim
June 14, 2017

Thirty or so years ago, a long-tailed macaque at the Uluwatu Temple in Bali, Indonesia, took something from a visitor. A pair of sunglasses, maybe, or a hat. Which wouldn’t have been so unusual—monkeys are quite the little scamps—but something unexpected happened next: the visitor, or perhaps a helpful member of the temple’s staff, offered food in return for the stolen goods. The monkey made the swap. And so began what’s become a thriving, one-of-a-kind monkey-human economy.

There are several ways to think about this interspecies marketplace, which ethologists led by Fany Brotcorne and Jean-Baptiste Leca of the University of Lethbridge describe in the journal Primates. Brotcorne and Leca’s group, which spent four months documenting interactions at Uluwatu, is especially interested in how this behavior arose and spread. They found that the exchanges—which among other objects included glasses, hats, shoes, hair clips, jewelry, cameras and phones—varied in frequency between monkey groups living near the temple. That and the fact that monkey-human trading is found nowhere else suggest it’s truly a cultural tradition, with successive generations of temple macaques learning by watching their enterprising peers.

That observation “might provide some insight into the evolution of a traditional token economy in hominins,” write the researchers. It also speaks to the considerable intelligence and behavioral adaptability of macaques. In captivity, experimental token-exchange paradigms are used to investigate a host of cognitive properties: social learning, memory, gratification delay, numerical judgement, economic behavior. There’s a lot of smarts underlying the Uluwatu monkeys’ antics. Insights into human evolution aside, they underscore the infrequently-appreciated richness of monkey minds. “Unfortunately there is still a bias in cognitive science,” says Leca, “with a stronger emphasis put on great apes than on monkeys when it comes to seemingly complex processes such as intelligence and culture.”

There’s also a broader conceptual aspect to the findings. In recent years, many anthropologists have reframed their work as anthrozoology—studying not just human societies, but our entanglement with animals in so-called multispecies communities. The terms might sound academic, but they’re made explicit at the Uluwatu Temple. Not only did the macaques have ready access to people and their food; temple staff and visitors, who follow Balinese Hindu philosophies that regard temple monkeys as sacred and deserving of tolerance, accepted them. The resulting economy “was based on coexistence between these two species,” Leca says.

That’s likely to change in the future. The temple’s monkeys sometimes keep what they take, says Leca, and complaints by upset tourists have led temple staff and local communities to discourage people from participating. Eventually the tradition will disappear. But our memories will remain as testimony to the complex relationships that human and monkey societies can build together.