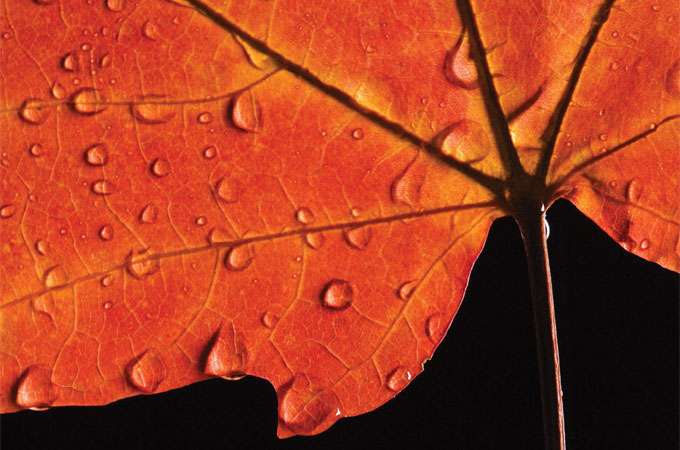 As scientists begin to hack the code for the humble leaf, they are peering into the past and engineering a greener future.

Researchers from UCLA have discovered a strong mathematical relationship between leaf size and leaf-vein patterns that gives them a more detailed picture of past climates. Smaller leaves are more common in drier, more exposed habitats. And it turns out that major veins in smaller leaves are packed more tightly than in larger leaves, providing more “superhighways” for water transport. With this new understanding of leaf-vein architecture, scientists now need only fossilized fragments of leaves to learn about the climate in which the plant lived.

Biologists at the University of Adelaide in Australia found evidence that leaves are shrinking due to climate change. In a recent study, they discovered that hop bush leaves have narrowed 2 millimeters over the past 127 years, representing a 40 percent decrease in width.

Millions of “leaf peepers” visiting New England in the fall are starting to see more subdued foliage tones. Warmer fall temperatures contribute to muted red hues, but no one knows exactly why. Early results of research at the Vermont Agricultural Experiment Station suggest that the development of red-colored anthocyanin pigments requires cold temperatures to shut down sugar transport out of leaf cells. 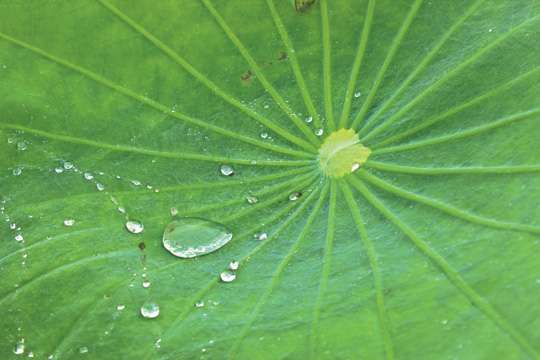 Nanoscale bumps on the surface of the lotus leaf cause water droplets to bead up, gather dirt, and easily roll off the leaf. This water-repelling, self-cleaning strategy has inspired efficient renewable energy technologies. For example, researchers have developed textured coatings—similar to those of the lotus leaf—that can be applied to solar panels to keep them cleaner and running more efficiently. In addition, researchers at General Electric are creating superhydrophobic coatings for wind turbines to prevent ice formation on the blades.

Engineers at Royal Philips Electronics in the Netherlands have designed smart building skins that mimic leaf stomata. Much like the manner in which stomata breathe for a plant, these “skins” transport air, water, and light from outside a building—to be used efficiently inside. The “pores” of the building open and close in response to temperature, light, and other external conditions—supplying building inhabitants with filtered air and water as well as natural air conditioning.

Solar Ivy is a customizable energy-generation system composed of thin-film photovoltaic “leaves” attached to a stainless-steel mesh that wraps around a building. Developed by Sustainably Minded Interactive Technology (SMIT), the PV cells not only produce energy but also provide shade.

Researchers at MIT, led by chemist Daniel Nocera, have discovered how to mimic photosynthesis with an artificial leaf technology. Their “leaf” is a silicon solar cell coated with catalysts that split water molecules. No external wires or control circuits are needed. Placed in water and exposed to sunlight, the “leaf” generates oxygen and hydrogen bubbles that can be collected and used later to power a fuel cell.

Drawing inspiration from rustling leaves, engineers at Cornell University have devised a new way of harnessing wind energy. Their Vibro-Wind system consists of an array of foam panels that quiver in the breeze. A piezoelectric transducer, which emits electrons when stressed, converts the vibrations to electricity.