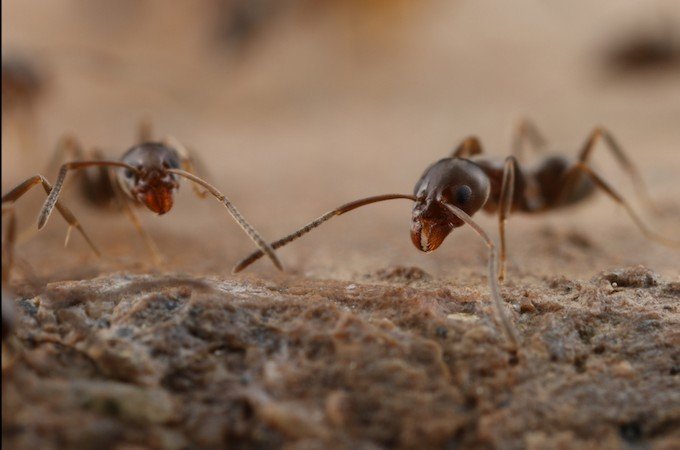 How to sustainably stop Argentine ants on the march

How to selectively and efficiently target the pest species without negatively affecting the rest of the ecosystem? Pheromones.
By Jason G. Goldman
March 16, 2016

In 2012, California-based pest control companies unleashed more than 50,000 kilograms of pesticides in urban areas, all of which was targeted at just a single species: the Argentine ant, Linepithema humile. The six-legged invaders have increasingly become recognized as a major nuisance in the United States, especially in California and Georgia, and to a lesser extent in North Carolina, South Carolina, Alabama, Mississippi, Louisiana, Florida, and Tennessee. According to one survey, more than eight in ten pest control-related businesses in California are wholly dedicate to this species. It’s quite reasonable for property owners to wish their homes and businesses rid of the insects. The question is how to selectively and efficiently target the pest species without negatively affecting the rest of the ecosystem. One pair of researchers thinks they’ve found an answer: pheromones.

Traditional insecticide sprays are a popular method of pest control because their application is extremely simple and they work rapidly. Unfortunately, the active ingredients in these solutions turn up in waterways, where they also wreak havoc on so-called “non-target species” that may be crucial to maintaining intact, functional ecosystems. One such insecticide, fipronil, has been observed in urban waterways at levels that exceed the LC50 value for many aquatic shrimp. That is, they’re at such high concentrations that 50% of those shrimp populations are expected to die.

Baiting is another useful technique and is usually preferred to sprays because the active ingredients can remain localized. But baits are a bit trickier to make effective. They need to be palatable (and remain so for at least a few weeks), and they need to be transferable from one ant to another. Because of that, the toxicity needs to be delayed. Taken together, baits are more environmentally preferable than sprays, but sprays remain a bit more effective. What University of California, Riverside entomologists Kevin F. Welzel and Dong-Hwan Choe wanted to know was whether they could make baits more attractive to Argentine ants, thereby increasing their efficacy while still remaining environmentally friendly.

Properties can typically expect a 40% decrease in ant activity after a baiting procedure has been deployed for a month. Traditional baits are distributed with the hope that the ants will simply find them. But what if you could proactively lure the ants? In an effort to improve its effectiveness, the researchers took a bait commonly used in California called Optigard, and mixed in an Argentine ant pheromone called (Z)-9-hexadecenal. The hope was that the pheromone would act as a dinner bell.

In a laboratory experiment, the addition appeared effective. More ants fed on the pheromone-infused bait in 30 minutes than did ants given the bait alone. That proved, at least, that the pheromone attracted more ants than the bait could alone. In addition, more ants died in the colonies fed with the treated bait.

But 30 minutes in a laboratory setting is quite different from the real world. Would the spiked bait also be more effective in the field? To find out, the researchers turned to ten homes afflicted by an Argentine ant invasion. For five of them, they laid out an array of plastic 15-ml tubes filled with the unadulterated bait. The bait was stirred into a sucrose solution, and the tube was capped. Into the cap the researchers drilled a 3mm hole – large enough to allow the ants access, but small enough to prevent water from falling in and to limit access to other, non-target organisms. The other five homes got the same treatment, but the bait was laced with the pheromone.

By the end of the first week, there were actually more Argentine ants detected at the homes with the pheromone-infused treatment. That’s probably because the pheromone did its job in attracting the ants. But by the end of the second week that spike was reduced, and after four weeks that house saw a 74% reduction in Argentine ant activity, compared to a 42% reduction at the other properties. By stirring the pheromone into the bait, the researchers had created a treatment that was nearly twice as effective.

Most importantly, by using the plastic, capped tubes, they virtually eliminated the chances that the bait could spread into local waterways. “Underground bait stations were protected from homeowners, children, and pets,” write the researchers, “and 100% of the bait stations were retrieved at the end of study.” Equally importantly, this is an innovation that comes on the cheap. Based upon the current market price of synthetic (Z)-9-hexadecenal ($36.75/gram), this pheromone-assisted baiting technique remains economically viable. After all, the researchers only added 0.2 micrograms of the stuff to each dose of the bait.

Relying on the goodness of peoples’ hearts and on their desire to maintain intact ecosystems is a strategy that only works for a subset of property owners. But if those benefits can arise from a pest control strategy that isn’t prohibitively expensive by comparison, then perhaps pest control companies can successfully persuade their customers to opt for this sort of technique. Or perhaps the impressive effectiveness of a pheromone-infused baiting procedure is enough to convince those companies to abandon spraying altogether, releasing their customers from having to make a choice in the first place. In either case, federal and state regulations are becoming more restrictive when it comes to using spray-based insecticides, and this research provides a clear alternative.