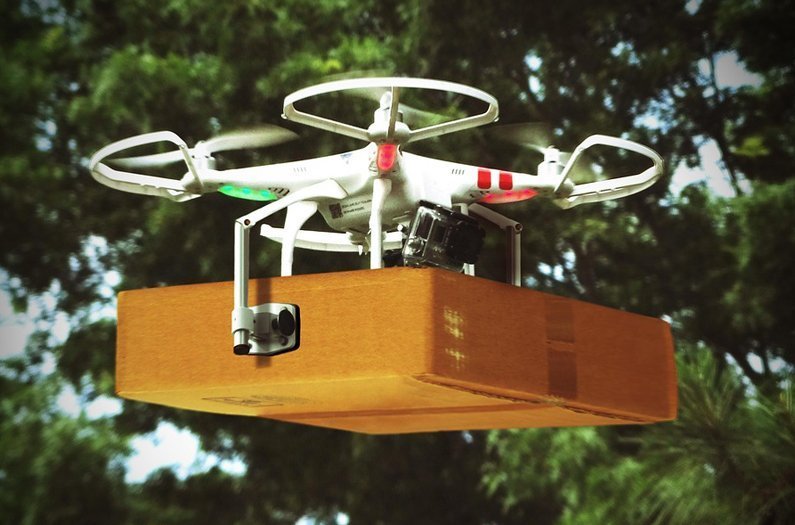 A new analysis finds that trucks are more environmentally beneficial for longer delivery routes with many stops, but drones emit less when delivering light packages over small distances.
By Prachi Patel
June 1, 2017

Online shopping is booming, and unmanned aerial vehicles—drones—are expected to take to the skies en masse in the next few years to deliver packages. That could be a good thing for the climate, a new study finds.

Drones emit less carbon dioxide than trucks when they don’t have to go very far for delivery or when there are fewer recipients, or both, University of Washington engineers have found. A delivery system that combines trucks and drones would be most climate-friendly, they note in the journal Transportation Research Part D: Transport and Environment.

Companies such as Amazon have been promising package delivery via drones for years. In China, online retailer JD.com launched drone delivery in four provinces last year. The rise of delivery drones has led to public debate about privacy, airspace congestion, and cost savings. But no one has analyzed the environmental implications.

So civil and environmental engineers Anne Goodchild and Jordan Toy created two computer models, one each for trucks and drones, to compare the miles traveled and related carbon emissions for package delivery in the Los Angeles region. They created 10 different scenarios, each of which had a different number of recipients, ranging from 50 to 500. The vehicles delivered a range of products to these recipients.

To calculate truck carbon emissions, the researchers used data from real-world truck fleets in California that run on diesel fuel. Drone emissions were based on the fossil fuel-powered electricity used to recharge its batteries.

Drones consume more energy as the number of stops and parcel weight increase. The model assumes that the aircraft could only carry one parcel at a time, so they typically traveled more miles than trucks.

The results show that in general, as a drone’s average energy requirement increases, trucks become more advantageous in terms of reducing carbon emissions. So while trucks are more environmentally beneficial for longer delivery routes with many stops, drones emit less when delivering light packages over small distances.

A hybrid system in which a truck hauls packages to a central location from which drones take the packages to homes and businesses would emit the least, the researchers say. Such last-mile delivery would be especially effective in rural areas, where it would prevent trucks from having to venture off main roads.

Future research in this field should compare other emissions such as nitrous oxides and particulate matter, the researchers say.