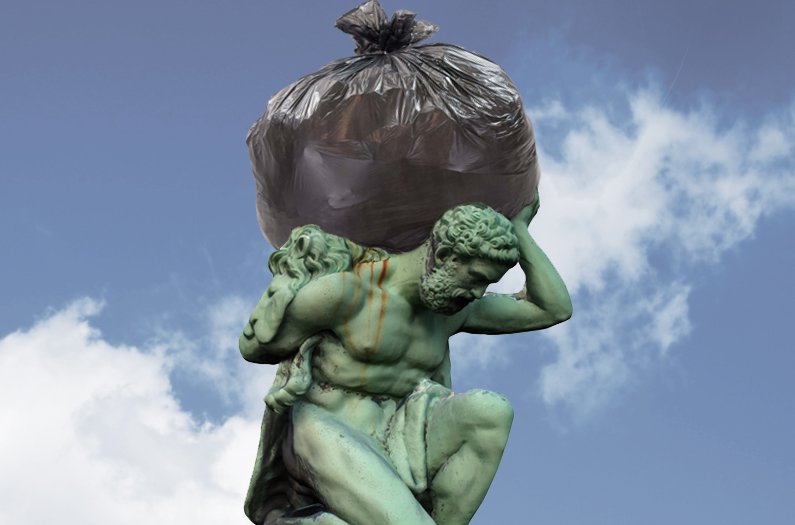 In everyday life, plastic is unremarkable. In the big picture, though, plastic is mind-boggling – the agent of “a singular uncontrolled experiment on a global scale, in which billions of metric tons of material will accumulate across all major terrestrial and aquatic ecosystems on the planet,” as researchers wrote last week in the journal Science Advances.

The trio of researchers – Roland Geyer of the University of California, Santa Barbara; Jenna R. Jambeck of the University of Georgia; and Kara Lavender Law of the Sea Education Association in Woods Hole, Massachusetts – undertook the first-ever effort to estimate the total amount of plastics ever produced and comprehensively trace their fate.

The estimates are based on data from governments, NGOs such as the World Bank, and industry sources and market research firms. There’s a lot of uncertainty in the calculations, the researchers acknowledge, because modeling on such a large scale involves simplifying assumptions, and because information from some parts of the world may be incomplete or imprecise. But even adjusting to account for such uncertainty yields huge amounts of plastic being made – and quickly discarded.

For example, they found that the majority of all plastics ever produced, 6.3 billion metric tons, have already been thrown away. The world generated 302 million metric tons of plastic waste in 2015 alone.

Nearly 80 percent of plastics thrown away so far have ended up in landfills or in the natural environment – the plastic bag caught in a tree, the plastic straws littering beaches, the microbeads and other tiny bits of plastic in the stomachs of seabirds, fish, and even people.

Discover more:  In the sustainability race, the Olympic Games are lagging behind

If current trends continue, there could be 12 billion metric tons of plastics in landfills or in the natural environment by 2050.

And, because plastic does not biodegrade, there it will stay for thousands of years, perhaps providing a clue to help future archaeologists identify our current epoch. 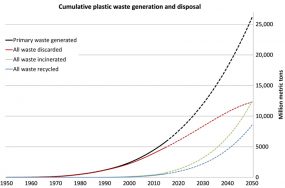 Overall, 12 percent of plastic waste produced so far has been incinerated and 9 percent has been recycled.

The vast majority of that recycling and incineration has happened since 1980. Rates are increasing every year, but vary in different parts of the world. In 2014, Europe recycled 30 percent of its plastics and China 25 percent, and the US only 9 percent. In most other countries, the picture is likely similar to that in the United States.

And recycling only delays the inevitable, the researchers point out: just 10 percent of recycled plastics are recycled a second time.

The real problem is the stunning mismatch between the lifespan of plastics and their use-span. Bio-based, biodegradable plastics, which break down much more easily in the environment, are rapidly improving. But global production capacity for those plastics is only 4 million metric tons a year, a tiny fraction of current plastic use.

Some plastics, like those used in building and construction, may remain in use for decades. But the largest market for plastics is in packaging, which accounts for 42 percent of all non-fiber plastics, the researchers calculated. They found that most plastic packaging is in use for less than a year before being thrown away – a mere blink of an eye on the plastic time scale.

Source: Geyer R et al. “Production, use, and fate of all plastics ever made.” Science Advances. 2017