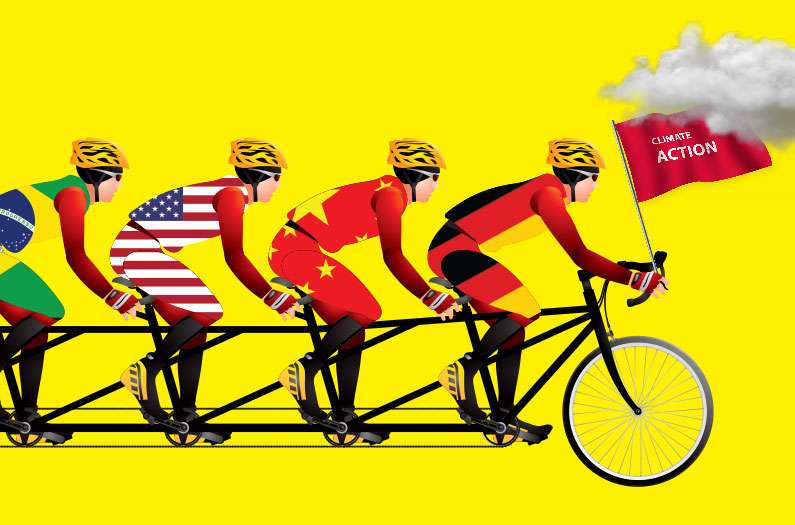 In a new survey, people were more willing to pay for climate action in their country if other countries are implementing similar policies.
By Sarah DeWeerdt
November 15, 2022

It’s easy to be skeptical of big international climate meetings like COP27: a lot of spectacle and a lot of muckety-mucks, but a regular person observing from the outside might wonder if the results are worth the expense and environmental impact.

In fact, this sort of international coordination could be more important to building public support for climate action than previously thought, a new analysis suggests. The study shows that people are more willing to pay for climate action if other countries are implementing similar policies.

“Investing in international agreements is worthwhile not only from a natural science perspective, but also for policymakers interested in securing broader public support for costly climate action domestically,” says study team member Michael Bechtel, a climate politics researcher at the University of Köln in Germany.

When a respondent’s home country was said to be alone in imposing the carbon tax, 53% supported it. When people were told that other countries were doing the same thing, support jumped to 59%, the researchers report in Nature Communications.

This difference means it’s more likely that a majority of people in a particular country would actually vote in favor of a tax if other countries were pursuing similar policies, the researchers point out.

The researchers also probed participants’ beliefs about what results a carbon tax might have. People are more inclined to support a multilateral carbon tax because they believe this will make the policy fairer and more effective, this analysis showed. Multilateralism “resonates with widely held fairness norms such as reciprocity,” Bechtel says

In a second study, involving the same group of people from France, Germany, and the United Kingdom, as well as 4,075 people in the United States, the researchers looked at how varying costs—in both the participant’s home country and elsewhere—affected support for climate policies.

Not surprisingly, people weren’t keen on paying a lot for climate action if the cost of carbon abroad was low. But nor did they favor policy combinations that kept costs low at home but imposed high costs abroad. In general, they preferred scenarios where costs were broadly similar across countries.

When the price of climate action increased in a person’s home country, support for the policy decreased. But the decrease in support was less pronounced if other countries were taking on higher costs, too. This pattern was strongest when overall costs were high.

“This is particularly important because some have suggested that countries should rely more strongly on unilateral climate action,” Bechtel says. “However, our findings suggest that the political feasibility of progressive climate action increases if policy efforts include other countries.”

But it’s not necessary for people to be immersed the wonky details of other countries’ climate policies, Bechtel adds: “The results suggest that even relatively brief, non-technical information about whether other economies are pursuing climate action increases the willingness to back domestic action.” And even loose coordination of climate policy of the type facilitated by international climate meetings can create this sense of shared effort.

It’s not yet known whether multilateralism also increases people’s willingness to support other environmental policies to address biodiversity loss, air pollution, and so on. “In addition, the current energy crisis raises questions about the willingness of the public to pursue climate objectives amid rising energy prices and fear of the long-term stability of energy supply,” Bechtel says.