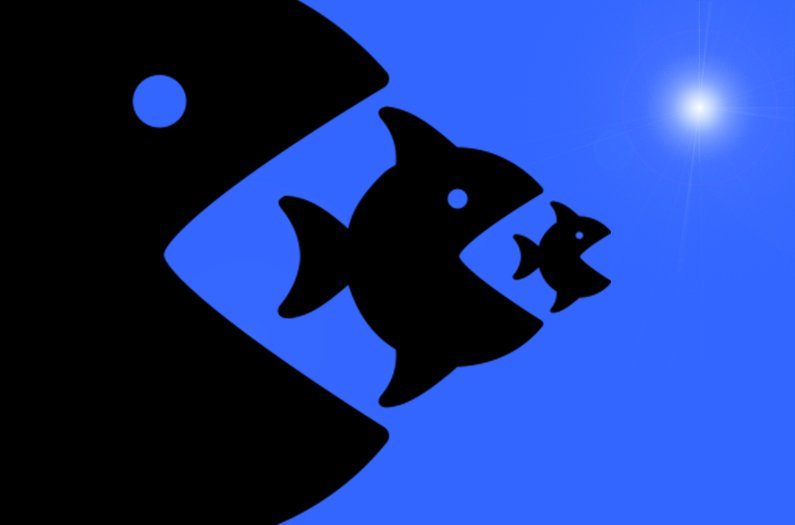 As aquaculture increases at a steady pace, one new study delves into the question of how we can sustainably feed all those extra fish.
By Emma Bryce
July 6, 2018

Eating fish instead of red meat is often touted as the better choice for the environment. But is this benefit as clear cut as we like to think?

Consider this: More than half the fish we eat is now farmed, and one way to nourish those animals is to catch much littler fish like anchovies, sardines, and herrings far out at sea, bring them back to land, and grind them up for feed–essentially mimicking a natural process, but at industrial scales. Now, for the first time, a Nature Sustainability study reflects on how humanity’s growing appetite for farmed fish could, through this process, exhaust certain populations of wild ocean fish by 2050–unless we take steps to improve the way we farm.

The University of California, Santa Barbara-led study found that on the one hand, if we focus single-mindedly on producing more and more farmed fish, the oceans could feasibly support a 30% increase in fisheries for anchovies, herring, and sardine. But on the other hand, this intensified fishing would be short-lived: by 2037 those forage fish populations would be heading towards a collapse, the researcher’s models showed.

Instead, we could directly reduce the amount of forage fish we need in the first place. And we could start by limiting its presence in the diets of farmed fish species that need it least, the researchers write. Take carp and other freshwater fish: these species aren’t carnivorous in the wild, and yet in aquaculture they’ve become some of the biggest consumers of forage fish because this high-protein diet accelerates their growth. Just partially replacing forage fish in the diets of these freshwater species with other sources of food–like algae or insects–could, by 2050, slash forage fish consumption by 9 million tons. Looking beyond farmed fish, if we also reduce the amount of fish used to feed other kinds of livestock–like chickens and pigs–we’d be able to leave a further 6.8 million tons of forage fish in the sea.

The researchers also uncovered ways for aquaculture to benefit from the surprisingly wasteful habits of our general fisheries. Catching fish for human consumption results in huge quantities of guts, heads, scales, and tails that could be recycled and fed back into aquaculture. Even if these byproducts were used in just a small portion of farmed fish diets, it could reduce the global demand for forage fish by 3%.

The findings emerged from a computer simulation that the researchers built to test out several future fishing scenarios. These revealed where wild forage fisheries would reach their limit, and how various modifications to our farming methods, when plugged into the model, could change that outcome.

And yet, the measures that the researchers tested out would at best buy wild fish populations some time, acting as a kind of insurance against imminent collapse. They won’t necessarily be able to shield populations of anchovies, herring, and sardines from eventual destruction, the researchers caution–especially if unexpected factors enter the mix. Climate change is one of these, as it could potentially reshape the future of forage species. The human appetite for fish is another: if people increasingly shift to pescatarian diets for health and environmental reasons, that would put even more pressure on aquaculture to grow.

Already, aquaculture is the world’s fastest-growing food industry, expanding at a steady clip of 6% each year. So to meet its unstoppable demand without wrecking wild fisheries, crucially, we’ll have to embrace other sources of protein for farmed fish–such as algae, yeast, bacteria and insects, the researchers conclude. “These unknowns really emphasize how important alternative feed sources are for the long-term sustainability of aquaculture.”