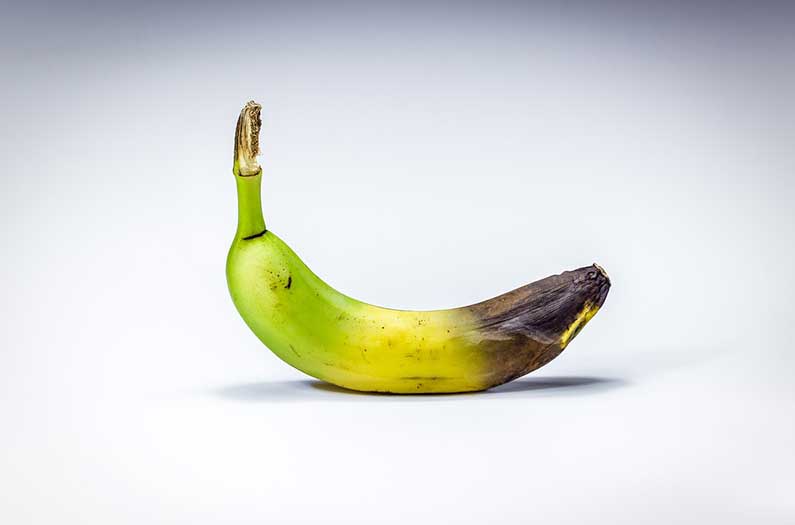 International researchers have developed a computer model that can detect visual signs of disease on banana crops - and warn farmers before it spreads out of control.
By Emma Bryce
August 23, 2019

The banana is the world’s most popular fruit: we consume 100 billion of them a year. And yet, their future is threatened by a spate of diseases that are ravaging crops worldwide. Now, researchers have developed a tool to tackle these silent killers: an artificially-intelligent smartphone app that can scan banana plants for early signs of infection, and alert farmers before it takes hold on their crops.

In field studies in India, China, the Democratic Republic of Congo, Benin, Colombia and Uganda, the researchers found that the new tool – which uses the phone’s camera to screen crops – is at least 90% accurate in identifying the six most serious diseases and pests that plague banana plants. Those include two globally-destructive infections known as Black Sigatoka and Fusarium Wilt which together have decimated vast tracts of banana plantations worldwide.

This invention – produced by researchers from global institutions including Biodiversity International and the International Centre for Tropical Agriculture – is driven by the harsh reality that the bananas we know and love risk being wiped out globally, by the growing threat of disease. This especially affects the Cavendish, the banana variety that we consume most widely worldwide, and the type that most people in the west typically buy in grocery stores.

Our love for this particular variety has driven the establishment of massive monoculture plantations in banana-growing countries, which has caused the fruit’s downfall: without genetic variety on these farms, they’re left exposed to the ravages of disease, which can rapidly decimate vast tracts of cropland in one go.

Already, crops in Asia and Africa have been affected by one of the most voracious of these threats, Fusarium Wilt. Recently, the disease even reached Latin America, which is home to Ecuador, the world’s largest exporter of Cavendish bananas.

The smartphone app is based on a computer model that uses algorithmic deep learning to make its predictions. To produce this, the researchers gathered 18,000 photos of banana plants from farms around the world, many exhibiting various signs of poor health. Then they used the gallery to train several computer models to identify the hallmarks of particular pests or disease in these images.

Recommended Reading:
Algae powers computer for a year using only light and water

The major benefit of the app is its flexibility, according to the researchers. It can identify signs of disease on any part of the plant, and can accurately identify disease even in low-quality photos, or in images where there’s lots of background noise – such as leaf litter coating the ground. In some cases, the detection rate for disease was as high as 100%.

Apart from protecting the world’s favourite fruit, the app is aimed particularly at protecting the livelihoods of smallholders. These farmers typically rely on small plots of land to support themselves and their families – places where an outbreak of disease could destroy an entire livelihood. The app is explicitly designed to avert that disaster, by equipping farmers with a DIY, hand-held tool to regularly check crops and rapidly identify disease-risk.

The app could also provide support for at-risk farmers: if a detection is shared through a live network, it could be used to alert agricultural extension workers – people who work between research institutions and farmers – who could come to the farmers’ aid to nip the disease in the bud.

This is exactly what the researchers have in mind for the next stage of development. Now they’re hoping to use the app to develop an interconnected, global system, fuelled by farmers who share information about their crops. This would enable experts to pinpoint where disease outbreaks begin, and figure out how to contain them before they spread out of control.

The researchers decided to call the app ‘Tumaini’, which means ‘hope’ in Swahili. They think that’s what the tool offers to the planet’s most vulnerable banana farmers. “This is not just an app, but a tool that contributes to an early warning system that supports farmers directly,” they say.