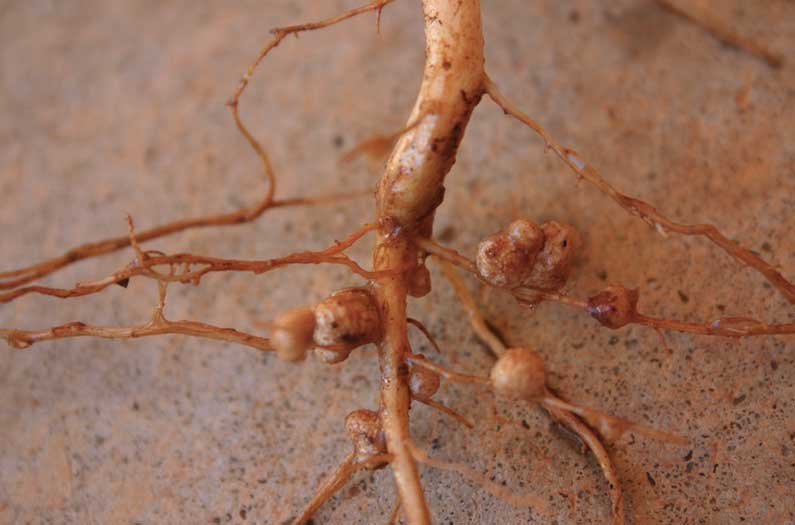 What if crops could be coaxed into making their own fertilizer?

Researchers have managed to engineer plants that can ‘talk’ to nitrogen-fixing bacteria in their roots—paving the way for the development of crops that could live off far less fertilizer, and reduce agriculture’s environmental footprint, overall.

Writing in Nature Communications, the international team of researchers describe how they started by studying a type of microbe called rhizobia bacteria, which naturally fix nitrogen from the soil into a form that plants can use. In nature, most plants get nitrogen either from soil bacteria that do this work, or from plants that die and recycle their nitrogen into the soil. But under the intensive regime of industrial agriculture, the constantly-depleted soil needs to be regularly enriched in order to feed new crops—which is why we apply fertilizer, to provide essential nutrients, including nitrogen. Yet the application of synthetic fertilizer also brings pollution, and the expulsion of emissions as soil microbes transform the excess into the harmful greenhouse gas known as nitrous oxide.

In those rhizobia bacteria, the researchers saw a potential solution to this conundrum.

These microbes occur inside the nodules in legume roots, but not in many other types of plants—which explains why legumes are particularly renowned for their nitrogen-fixing abilities. A small number of rhizobia synthesize chemical compounds called rhizopines, which they use as signals to communicate with one another. Aware of this fact, the researchers wanted to see if they could hijack that unique signaling system, and insert it into plants—investing them with the power to control the activities of nitrogen-fixing bacteria.

Once they’d identified the bacteria’s rhizopine-production pathway and how it worked, they managed to synthesize an artificial version of it, then engineer that synthetic pathway into model barley plants.

Then they analyzed the engineered barley plants and found that indeed, they were actively discharging rhizopines into their root systems—evidence that they were able to produce the compound using that synthetic pathway.

But most importantly, the researchers detected signaling between the plants and the surrounding communities of nitrogen-fixing rhizobia bacteria, suggesting that when these engineered plants produce rhizopine, they could indeed use it to control the bacteria’s behavior. “The key is that the plant now controls when those bacterial processes get turned on,” says Philip Poole, professor of plant microbiology at the University of Oxford, and author on the new study.

That opens up a range of possibilities—from getting bacteria to produce specific beneficial hormones, to making them fix the nitrogen that’s available in the soil.

Poole says the latter is now a special focus for him and colleagues: “We are now developing rhizopine-dependent switches to turn nitrogen fixation on,” he explains. That would enable plants to commandeer the bacteria to fix nitrogen that’s readily-available in the soil, for their benefit—instead of having to completely depend on fertilizer for those nutrients.

This is important especially for crops that are farmed at industrial scales, and are reliant on huge, damaging quantities of fertilizers. That’s why it’s pertinent that the researchers did their research on barley: “Cereals have by far the largest grain yields of any farmed plants, but these high yields are only obtained by adding very largely amounts of nitrogen fertilizer,” Poole explained. “A long term aim is therefore to make cereals self-fertilizing for nitrogen, so you can add less nitrogen fertilizer, which is environmentally harmful.”

While there’s still plenty of research to do before this becomes a reality in the field, if scientists can spread this nitrogen-harnessing capacity to other plants, it could usher in a new agricultural era of self-sustaining, resource-savvy crops.