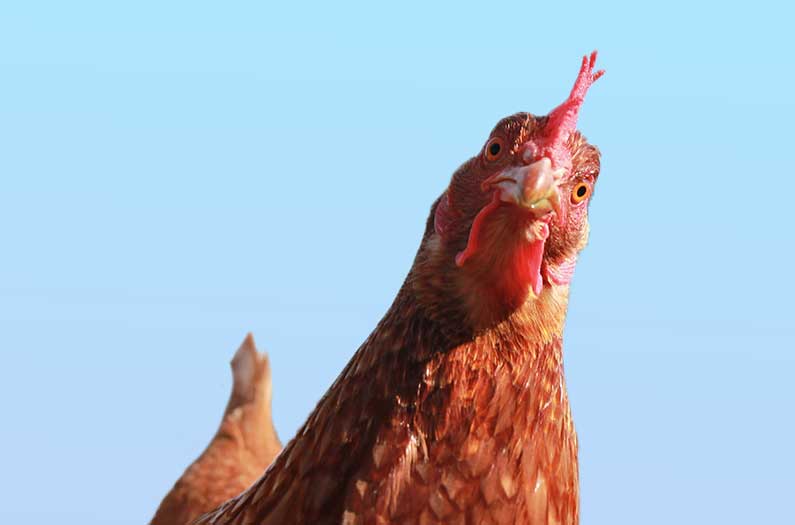 Chickens on a greener diet still taste like . . . chicken

Researchers are on a hunt for alternative livestock feeds—and algae and insect-based diets offer more advantages than you might expect.
By Emma Bryce
July 10, 2020

Livestock feeds of the future might be rather more wriggly and green: Researchers have found that switching chicken feed from soybeans to a diet of insect and algae protein would have no discernible negative effects on the taste or quality of the meat. What’s more, it would cut out some of the huge environmental costs associated with farming soybeans for livestock feed.

Writing in Journal of The Science of Food and Agriculture, the researchers argue that with the rise in meat consumption globally, it’s going to become increasingly necessary to find more sustainable feeds for animals beyond the likes of soybeans, which results in untold hectares of deforestation annually, as monoculture farms make their steady advance. But, the challenge is to source alternatives that don’t make the product unacceptable to consumers.

So, the researchers examined the effects on the taste and appearance of chicken of two well-known alternative feeds: Black soldier fly larvae, and spirulina algae, which are already used as alternative proteins and dietary boosters in aquaculture and human foods, respectively. Taking 132 broiler chickens as their test subjects, the researchers fed the birds a diet made up of either a regular 100% soybean-based feed, a mainly algae-based feed (mixed in with some soybeans), or a fly larvae-based feed (also mixed in with some soybeans). After the well-fed birds were culled, an independent 12-person tasting panel was recruited to test the texture and flavour of the meat.

This discerning team of tasters found that the meat of chickens that had been fed the alternative diets was similar in texture and taste to regular soybean-gobbling birds. The only really notable difference was a positive one: The panel reported back that the flesh of algae-fed birds actually tasted more savory and chicken-like than the rest. They also noted that primarily larvae-fed chicken meat had a slightly less adhesive texture when chewed.

There were, however, a few more notable differences in the appearance of the different meats. Larvae-fed chicken carcasses turned out to be weightier, and both alternative diets resulted in raw chicken meat that appeared slightly yellower than the soybean-fed birds. That suggests that consumer perceptions when purchasing raw meat could be an important hurdle to jump. But importantly, once the meat was cooked and presented to the tasting panel, the tasters could no longer detect the yellowish hue.

When the researchers assessed the nutritional profile of the meat, they did find that the larvae-fed meat contained higher levels of saturated fats—which might not thrill health-minded consumers, who typically buy chicken for its low-fat profile. But, other research has shown that that fat content could be controlled and reduced  through various methods during the processing of the larvae meal, itself.

Commenting on their findings, the researchers write: “All-in-all, no eating quality concerns were identified. [Larvae]-fed chicken mirrored the control group, and algae feed makes it taste all-the-more like chicken.”

Yet, even though associated habitat destruction gives soybeans the more detrimental environmental profile, the alternative feeds come with their own caveats, too. Bioreactors are required for growing algae, and those are expensive, and the energy that goes into production can, in some instances, have a larger environmental footprint than crops. So for algal production to be significantly upscaled, its efficiency would have to improve. There are also regulatory hurdles around insect protein: In Europe and other parts of the world, larvae aren’t permitted for uses beyond fish and human consumption. Though, that’s likely to change before too long.

Done right, the benefits of alternative feeds could outweigh these challenges. For instance, fly larvae can be raised on food waste—bringing production costs down while tackling another environmental challenge. While algae production comes with unique issues, it can be produced on much smaller plots of land than any vast, habitat-destroying farm.

And ultimately, feed innovation is a question of necessity. Even with many swearing off animal products globally, the fact is that meat consumption is rising worldwide. We need solutions that will start to bring down its environmental cost—however wriggly and green they might be.

Source: Altmann, et. al. “The effect of insect or microalga alternative protein feeds on broiler meat quality.” Journal of The Science of Food and Agriculture. 2020.